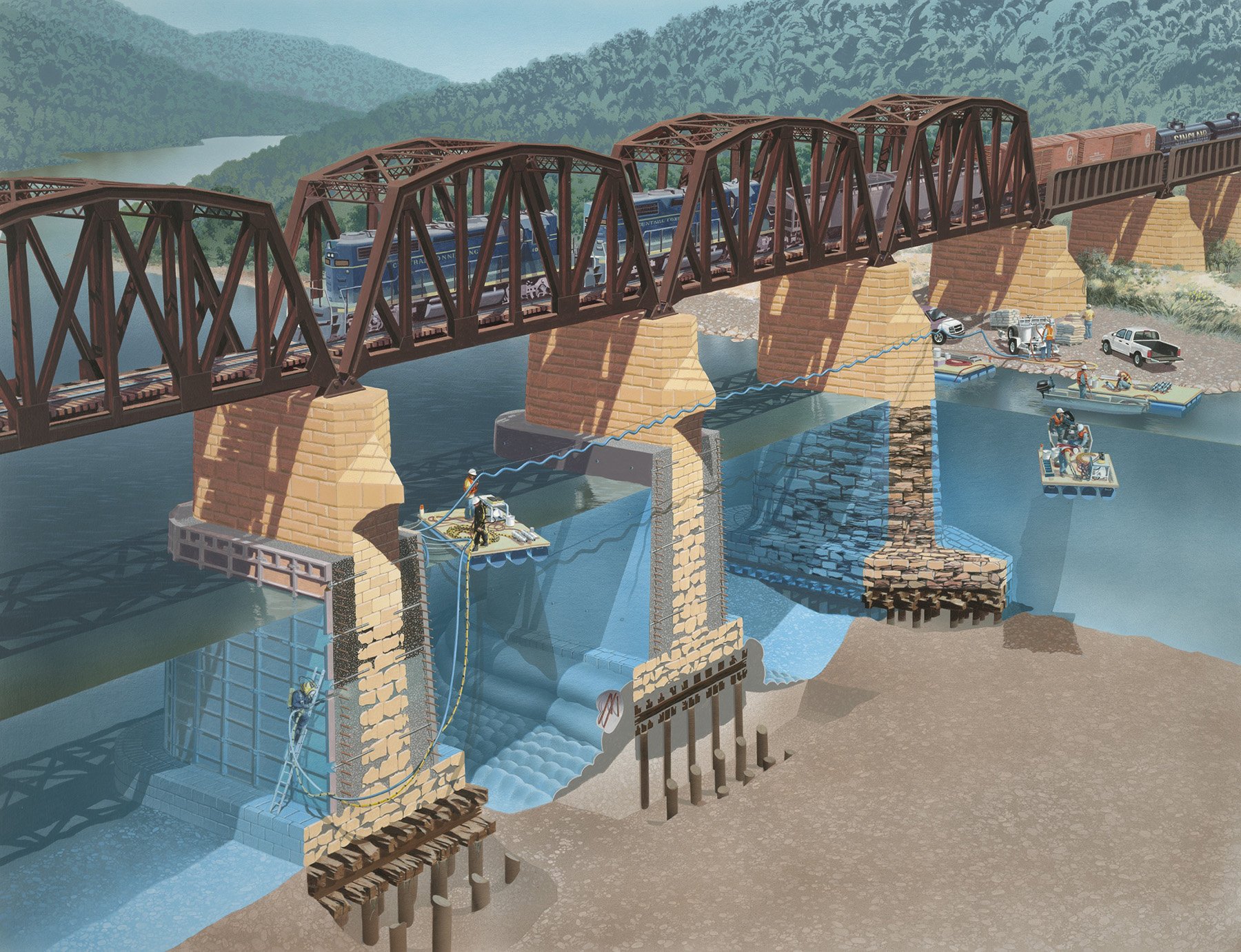 According to the United States Department of Transportation, underwater scour is the leading cause of bridge failure, ahead of both collisions and overloading. Scour is defined as the erosion or removal of streambed or bank material from bridge foundations due to flowing water. As many bridges sit over water, the potential dangers of scour cannot be ignored. There are many solutions to scour problems. However, there are two options that we find the most effective.

What does scour do to a bridge?

Strong water flows around the base of a bridge can lead to the degradation of the adjacent streambed, creating an area of localized scour.  If the water flow around the pier is strong enough, the size of the scour hole can continue to increase.  Once the underside of a pier, referred to as a footing, has been exposed the pier is undermined.  In many cases, the bridge pier becomes unsupported in these undermined areas.  If enough of the pier becomes unsupported, the pier is vulnerable to movement, rotation or tipping, leading to a failure of the bridge’s superstructure. The best protection for pier undermining is to protect the pier base before a localized scour hole develops. In order to gauge the current conditions of a pier, it is recommended that an underwater inspection be completed every few years.

One common practice for pier scour prevention is to place large stones, known as rip rap, around the base of the pier.  It is one of the most common and traditional methods for preventing scour and can be a very effective one.  It does, however, have some drawbacks. A very common drawback of rip rap placement is assembly and cost efficiency.  Rip rap placement requires heavy equipment such as excavators and sometimes barges.  In many situations, this equipment is unable to fit under the bridge structure.  Additionally, this equipment can be expensive to mobilize and use.

In some circumstances, rip rap has another complication often overlooked.  The thought is that by placing these large stones around the pier base, the riverbed is protected from washing away in strong flow conditions. However, in many cases, the placement of large stones around the pier base increases localized scour.  By placing these large masses of stone in the river, you reduce the effective cross-sectional area of the river, which increases the velocity between the piers.  This increase in velocity can increase scour conditions at the foot of the rip rap, creating a hole which causes the rock to eventually slide into the scour hole and away from the bridge pier.

Go To the Mat

Another scour remediation method is to surround the pier with an articulated block mat (AB Mat). Divers place a double-sided, fabric formed articulating block mat around the perimeter of the pier.  This mat typically extends 10 to 15 feet out from the pier.  Once positioned and secured in place, the mats are filled with a structural grout.  When filled with grout, the mats form a block pattern designed to articulate into a void area that may occur around the perimeter of the mat. Similar to rip rap, the foot of the mats are exposed to constant scour conditions, however, the mass of the mat, and the ability for the mat to articulate will counteract additional scour. Additionally, the mats have a lower profile than rip rap and are typically no larger than eight to twelve inches thick.  AB mats are a easily assembled, low profile and cost-effective method of scour repair and protection.

Typically, a small crew of divers can complete the installation of AB mats. Working from a small float, the divers can pump grout from a shore side batch plant or ready-mix truck located over 300 feet away. This eliminates the need for heavy equipment such as sectional barges, cranes, and excavators. The process can also be carried out from the deck of the bridge if need be. Additionally, diver assisted AB mat placement allows for a level of precision that is not possible when using rip rap

No one method of combating underwater scour has all the advantages. Both the riprap and the AB mats have their pros and cons, depending on your costs, work area, and equipment availability. Choosing the right technique for your job is a vital component to ensuring success. In either case, scour protection will extend the life of your bridge and must be in good condition to function effectively.

Looking for specifics? Determine if articulating block mats are a cost-effective solution for you in our next blog Fighting Scour With Articulating Block Mats.