The Art of Replacing a Railroad Bridge

Railroads don’t mess around when it comes to infrastructure upgrades. When bridges get replaced, they are often replaced with long-term solutions that will serve the railroad well into the future. Each bridge is a very small piece of an expansive system, however if it has to be taken out of service, the entire line may be shut down. Trains would have to be re-routed, time would be lost, and costs would go up. This is why in an expanse network of rail infrastructure; each bridge is a crucial piece.

Rail Transportation in the United States

According to the Federal Railroad Administration, the freight rail network of the United States consists of 140,000 rail miles operated by seven Class I railroads, 21 regional railroads, and 510 local railroads. The size and scope of the U.S. rail network is the largest worldwide.  In 2015 the U.S. Transportation system moved, on average, 49.3 million tons of freight daily, per the Bureau of Transportation Statistics. The use of railroads for freight transportation is the second most popular method, only behind truck transportation. It is also one of only two modes of private mass transportation of bulk commodities (pipelines being the other). Railroads work hard to modernize their infrastructure to keep up with economic demand. Continuous investment in their infrastructure allows them to stay competitive with other modes of transportation. 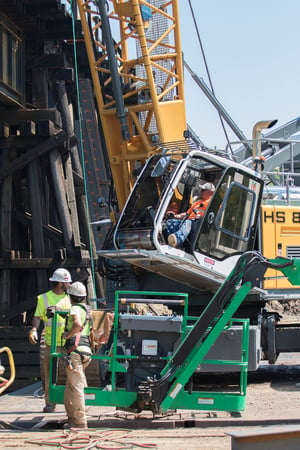 Why replace a bridge?

As trains continued to advance technologically, they became increasingly faster and heavier. Old bridges approach the end of their useful design lifespan and must be replaced. The older bridges are typically made of timber, while the newer structures we install consist of steel and concrete. These new bridges can add capacity to the rail line, but more importantly they can allow trains to traverse across at increased speeds. Higher speeds lead to higher efficiencies for the train.

The process of replacing a bridge occurs in a few steps:

The first phase involves installing a new substructure; this is done by driving piling and building new piers. This installation is usually done underneath the existing bridge as there is rarely allowance for realignment of the track. Remarkably, we typically install these substructures while the bridge remains open to train traffic. Contractors will get short windows of time to drive piling through the existing bridge structure and build the piers and abutments underneath. When a train approaches we have to remove all equipment as to not impede the tracks or delay the train. 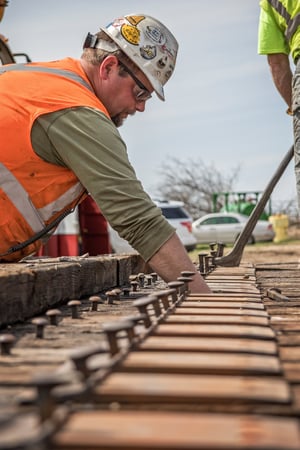 Once the installation of the substructure wraps up, a window of time is scheduled to remove the superstructure and replace it.  Scheduling these switch-outs requires a temporary shutdown.  Scheduling a shutdown of rail traffic is done a month or more in advance.  Our crews will work around the clock to remove the old deck from the old piers and replace the new deck on the new piers.

Whether we have six hours or thirty-six hours to remove and replace a superstructure, the work has to get done, no exceptions.  The length of time we have to shut down traffic depends on factors such as the amount of traffic that particular bridge receives, or the size of the bridge. On our bridge replacement projects, we have worked under time frames as short as four hours or as long as 16 hours. In our experience, an average switch-out time period is eight hours. Overrunning the work window is not an option. While this may seem extreme, the intricacy of rail transportation means slowing down even one train can cause a ripple effect across the whole line.

After the spans are switched out, our crews will also install any remaining backfill around the new abutments, ballast the approaches using a hi-rail dump truck, align the new track with the existing railway, and replace any damaged ties. Final demolition of the old piers may be done once the bridge is reopened to train traffic.

As the tonnage on freights is expected to increase it is certain that railroads will continue to improve and upgrade their infrastructure. In an industry where delays cost big money, a contractor must be ready to rise to the challenge of providing quality work while maintaining strict deadlines.