There are three important factors that must be considered to achieve the critical velocity of a given slurry mixture. These factors include the specific gravity of the slurry mixture in the pipeline, the flow rate of the slurry, and the internal diameter of the discharge pipeline. 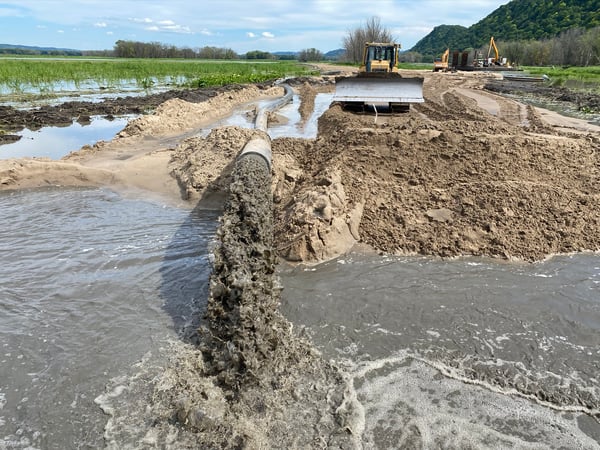 Specific gravity is the measure of how dense a material is compared to water, which has a specific gravity of 1.0. Materials that are denser than water (s.g. >1.0) will sink. Materials that are less dense than water (s.g.<1.0) are buoyant. For a dredged slurry, the specific gravity will fall between 1.0 (water) and 2.67 (solid stone). Since we are trying to avoid a plugged pipeline, the realistic specific gravity of a dredged slurry will vary between 1.0, when pumping only water, to 1.33 (40% density by weight), when the operator takes a big slug of material. On an environmental dredging project where the dredge cut will have various materials present, a pre-project investigation should be conducted to determine an average expected specific gravity. This is done by taking insitu-sediment samples of the dredge area and testing them in a lab.

Flow rate is the next significant factor that must be considered when trying to surpass the critical velocity of the slurry. In the United States, we refer to the flow rate in gallons per minute (GPM). Flow rate is the volume of fluid (or slurry) that can be pumped through the pipeline during a unit of time.

Now, the flow rate of a dredge system can become a technical monster, so we try to oversimplify. Flow rates are based on the head-capacity of the dredge pump, the speed at which the pump is rotating (RPMs), and the horsepower (HP) of the system. If you are interested in doing a deep dive on this subject matter, we would suggest referencing the Fundamentals of Hydraulic Dredging by Thomas M. Turner. Turner does a fantastic job describing the three Pump Affinity Laws and how they relate to hydraulic dredging.

Brennan has created its own software to calculate the required velocities for different size equipment or systems. This allows us to select the proper dredge or design a specific system for each project, which in turn allows for maximum production at the most efficient cost. Brennan owns and operates over a dozen customized hydraulic dredges and 26 booster pumps. We're able to match the horsepower and head capacity demands of the project with the correct dredges and pumps. The variable left that allows us to adjust the flow rate is pump speed, or RPMs.

This is where the operator comes in. Even though RPMs are constrained by the head capacity and the horsepower of the system, the operator can slow down or speed up the pump, which directly impacts the volumetric rate at which slurry enters the system. This then translates to velocity when we take the third factor into account.

The Inside Diameter of the Pipeline

The discharge pipeline diameter is the one and only constant in the dredge system because once the pipeline is in place, the diameter doesn’t change (we won’t get into a wear debate here). To explain how it affects the slurry velocity, let’s, for argument sake, make the diameter variable and the flow rates and specific gravity of the slurry constant. So, if you are moving 1,200 GPM of water through an 8 IN (internal diameter) pipeline, the water is traveling at 7.6 ft/s. If you move that same 1,200 GPM through a 10 IN pipeline, the slurry is traveling 4.9 ft/s. This is considerably slower! A smaller pipeline has less area, which means that to move a fixed flow rate through the pipeline, the speed must increase. 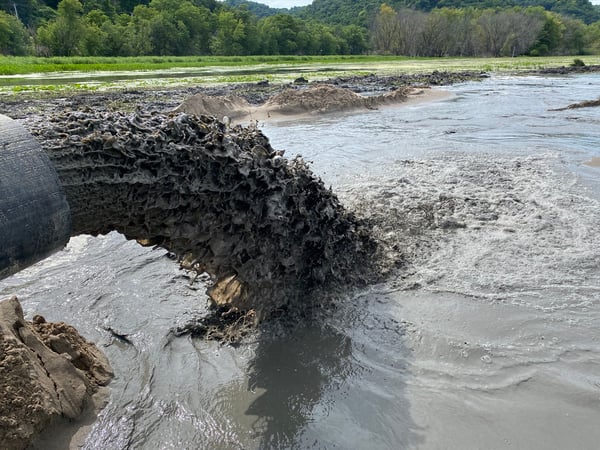 Now, the goal of the operator is to dredge as much as possible without clogging the pipeline (aka maximizing production). Therefore, he or she needs to maintain a heterogeneous flow (non-uniform distribution) throughout the length of the pipeline. A heterogeneous flow occurs when there is enough velocity through a given cross-sectional area of a pipeline to effectively suspend dredge material off the bottom of the pipeline. The heavier the material (or higher specific gravity), the faster the speed needed to move the dredge material, so it doesn’t settle at the bottom. The operator can adjust the flow rate by increasing or decreasing the pump speed and adjust the specific gravity by digging more aggressively or pumping straight water. However, they cannot change the pipeline diameter, so they must monitor the velocity of the slurry and adjust the other two variables accordingly.

How to Control Sediment

When tied together, a velocity curve can be created to show how the system will adjust when the other factors change. For instance, depending on how much material is in the pipeline (specific gravity of the slurry), the critical velocity for fine sand in an 8 IN pipeline may fluctuate between 5 and 11 FT/S. For gravel, it could range between 7 and 15 FT/S. The heavier the load (specific gravity of the sediment), the harder the system must work to achieve a higher velocity to keep the material in the slurry from settling to the bottom of the pipeline.

There are other factors that can affect critical velocity that need to be taken into account on a hydaulic dredging project. For instance, as the length of the pipeline increases, the friction in the system will lower the flow rate. To compensate, we add in boosters to increase system horsepower and head capacity and maintain the necessary flow rate.

Dewatering and water treatment are two more factors that impact critical velocity. These processes have influent flow limitations and can negatively affect the critical velocity in the pipeline if they are connected as one system. It is important to look at the entire system, to ensure every component accommodates the necessary flow rates that allow the dredge operator to maintain critical velocity.

Stay tuned for a future blog that will provide more details on dewatering and water treatment!

Dredging Success Depends on Our Operators

Given the complexity of all the factors that play a role in maintaining critical velocity within the pipeline, the operator has the biggest impact on production. At Brennan, we have invested heavily in new technology and equipment to aid our operators. Still, the success of the entire project is dependent on this individual(s). Suppose he or she operates the dredge too conservatively, we run the risk of under-performing and financial loss. If he or she gets too aggressive, we run the risk of clogging a pipeline and financial loss. Therefore, we have gone to great lengths to train and support our operators, so they have the skills required to balance these variables successfully. This includes surpassing the critical velocity of an ever-changing slurry mixture by understanding how material characteristics (specific gravity), flow rates (horsepower, pump speed, and head capacity), and diameter (discharge pipe size) all play together.

Other resources for more information:

Cost can play a huge role in an dredging project, review the 7 Cost Drivers of a Dredging Project.