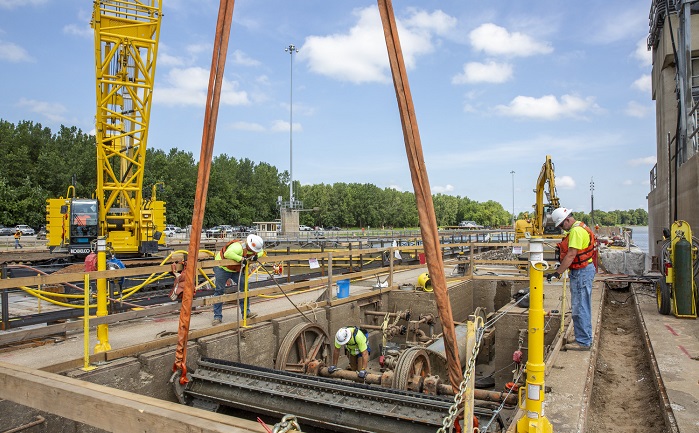 80 years old and 35 years since its last rehab, LaGrange Lock and Dam in Versailles, IL was in major need of rehabilitation. Brennan partnered with prime contractor Shimmick Construction (Shimmick) and the U.S. Army Corps of Engineers (USACE) Rock Island District, along with hundreds of crew members, to execute quality repairs through the existing lock.

The project included several scopes of work, with the overall goals of the project being to restore the lock chamber to original functionality, to increase structural integrity, and to reduce lockage delays. The project team completed all major work in 2019 and 2020, with the bulk of the work coming in a 105-day navigational closure on the Illinois River in the summer of 2020.

As a major subcontractor, Brennan had several tasks:

During the closure, Brennan's first scope of work was to install 14 stop-log style bulkheads upstream and downstream of the lock chamber. Then, we installed four bulkheads to seal both the landwall and I-wall culverts. This allowed us to remove the tainter valves, which are what controls the level of the water inside the lock chamber. Sealing the bulkheads on either end of the lock chamber was a challenge, but with persistence and several 10 IN electrical pumps, we were able to dewater the entire lock chamber. 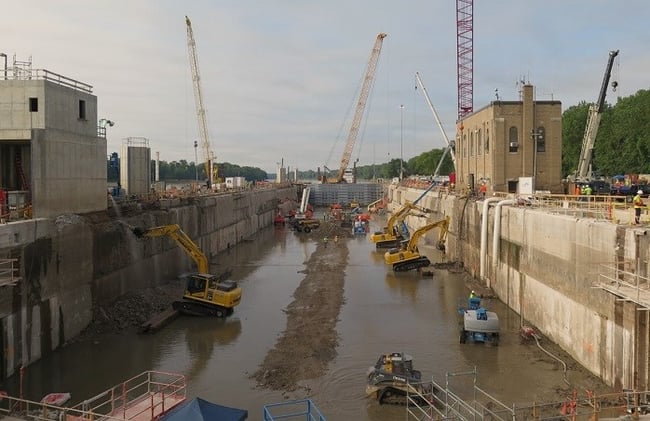 A view of the dewatered lock chamber at LaGrange lock and dam.

After the chamber was dewatered, construction work could begin. Shimmick's team began work on the interior of the lock, while our team focused on the exterior. A major portion of our work included resurfacing a 1800 SQFT concrete lock wall, most of which was still under water. To do so, we designed custom box-type cofferdams that were attached to the wall and had false floors in them. 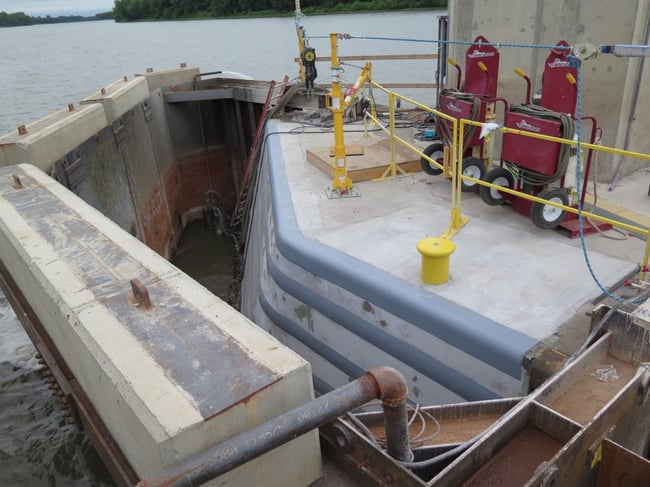 One of Brennan's custom box-type cofferdams used during rehab the dam.

Inside the cofferdams we removed 18 IN of concrete and steel armor plating. Then, we resurfaced contours with new concrete and embedded steel to prevent damage from barges as they lock through in the future.

Each leaf of a miter gate is supported by two steel-reinforced anchorages embedded in the concrete. Over the years, gate leaf design has changed, requiring a change in anchorage design. During rehab of the LaGrange lock chamber, miter gates were removed, and the old anchorages were cut out of the concrete walls using wire saws. 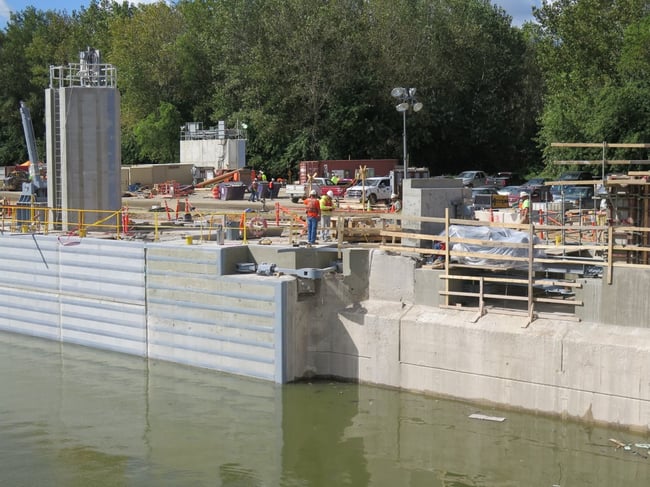 Miter gate anchorages when the miter gate is removed.

We installed new anchorages and secured them with 6 post-tensioned anchors per anchorage. Replacing the anchorages was especially challenging since the alignment had to be perfect. Otherwise, the lock chamber cannot be dewatered.

The LaGrange Lock and Dam is unique. When the Illinois River rises above normal pool elevation, the entire lock and dam goes underwater. This happens regularly and can sometimes go underwater to a depth of 14 FT, where towboat traffic can navigate over the top.

Unlike other lock and dam systems that use electrical equipment, the LaGrange equipment is hydraulic. The equipment was designed and installed to be able to withstand the added stress and abuse of being submerged in a dynamic riverine environment for extended periods of time.

After this much time however, we needed to replace the machinery used to open and close the miter gates and tainter valves. We tested and installed this equipment to tight tolerance for massive gates that weren't yet in place. The machinery and associated supports had to be installed to within 10 thousandths of an inch! 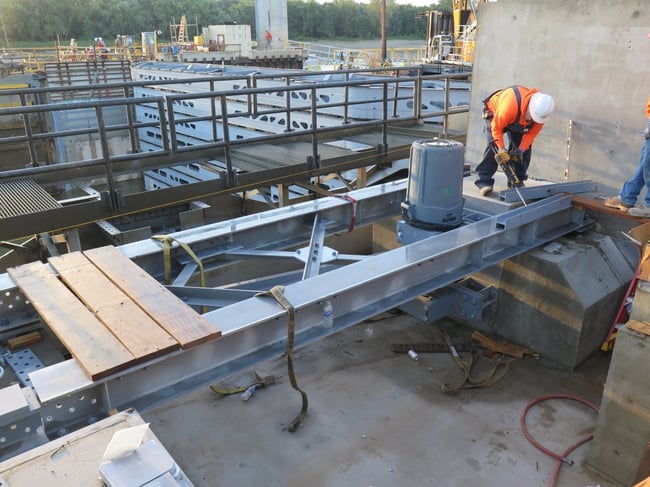 We removed and gave the four existing tainter valves a new look as well. These valves are the same ones that have been in service since the original commissioning of the lock in 1939. We replaced 113 rivets between the four valves as well as the cross bracing, seals, bushings, and trunnion pins. The valves were given a new coat of paint following stringent USACE paint specifications. 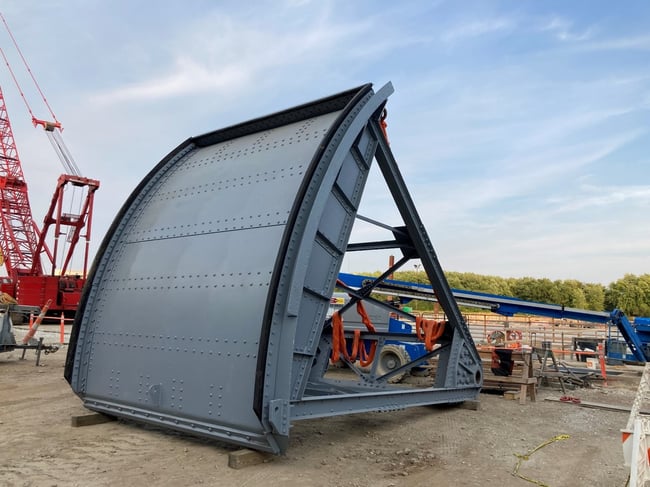 Rehabilitated tainter valve before being reinstalled in the lock.

The regulating weir, located on the east side of the dam opposite of the lock, was historically used to control the flow of the Illinois River as it passed the dam. In the 1980s a new tainter gate was built to improve the USACE's control over the river flow. With the new gate, the regulating weir became obsolete and was never used again. Over time, it developed a slow leakage and became a maintenance hazard.

The final component of major rehab is the recommissioning of the lock and dam. This is where the chamber is re-watered, and all of the new machinery is tested as a whole.

The USACE replaced the miter gates. But, it was our job to level them within a 1/16 IN tolerance across their entire 70 FT length. Then, we used shims under the sealing plates of the leaves so that the gates lined up and could seal correctly. The better miter gates are aligned, the faster the lock can be dewatered. 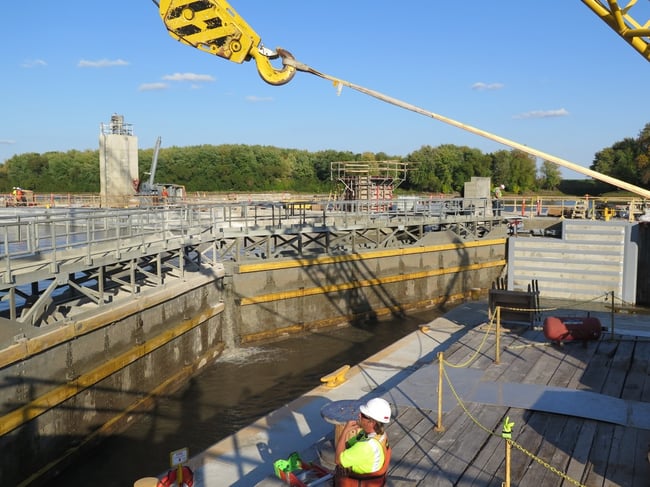 The tainter valves were adjusted similarly. With an existing structure and new gate seals, there can be issues between the two surfaces when not adjusted correctly. So we adjusted the seals after they were placed back in the tunnel, to ensure they did not catch on the side or leak too much water.

The challenge of completing rehabilitation an almost 80-year-old-structure in extremely poor condition was a constant battle. We found numerous locations with deterioration much more significant than expected, and new design changes had to be made. All stakeholders worked together quickly to come up with solutions to these problems, allowing us to complete the project within the navigational closure period.

High water was a continuous challenge. The entire LaGrange structure is prone to severe flooding. When the project fell behind due to flooding right at the beginning of the project, our fast-paced project schedule went into overdrive. Thanks to good partnering practices with Schimmick, the USACE, and numerous supporting subcontractors and suppliers, we were able to make up time and return the lock to service on schedule.

The COVID-19 pandemic also supplied its share of challenges as stakeholders developed new approaches to keep crew members safe from exposure. At any given point in time there could be hundreds of people working on site, yet crews were spaced further apart than normal, which affected daily operations. But we adjusted and made it work. All project stakeholders were able to put appropriate protocols in place, while doing their best to minimize disruptions and keep the workforce safe. 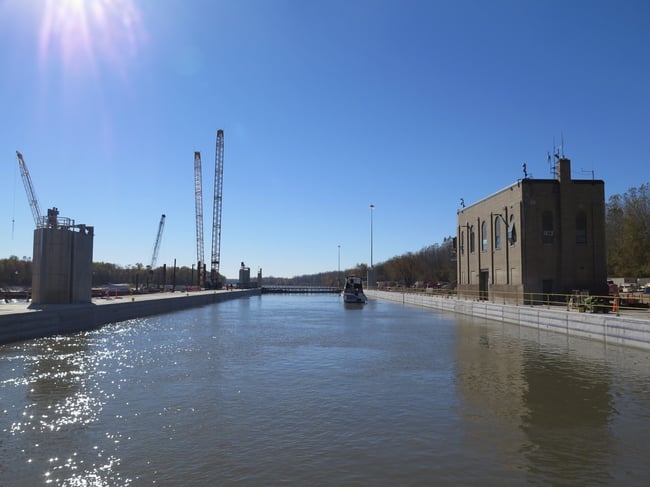 A much deserved thank you to the entire major rehabilitation project team! Special thank you to our project partners, especially Shimmick and the USACE Rock Island District, and thanks to our suppliers for their hard work and support.

Looking for more info on LaGrange? Engineering News-Record put together a detailed feature on the reopening of the lock and dam.

For details on Brennan’s dam construction capabilities, please visit our Dam Construction page or connect with our team.