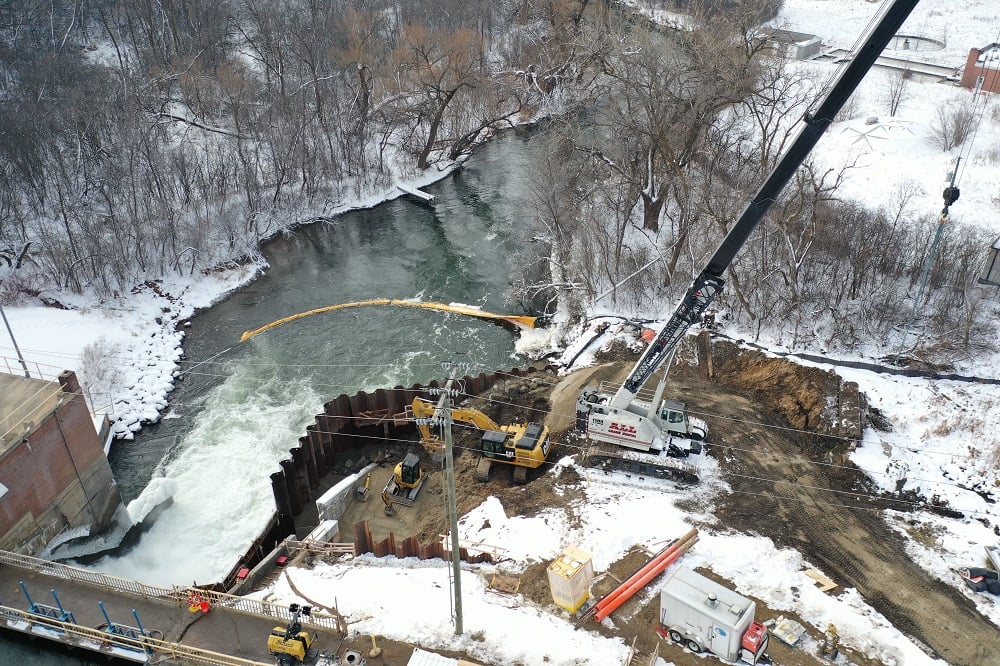 Pisgah Dam Gets a Face-Lift

After mobilizing in Fergus Falls, Minnesota, our team prepared the hydropower dam site for a new spillway wall. To allow work to begin, Brennan used a tracked hydraulic crane to install a permanent, 43 FT deep earth retention sheeting wall approximately halfway down the slope of the embankment. We installed the sheeting wall perpendicular to the flow of the river, into the hillside part way down the earthen embankment. The sheeting wall held back the hillside above, so that when we moved onto excavation the hillside would stay in place. 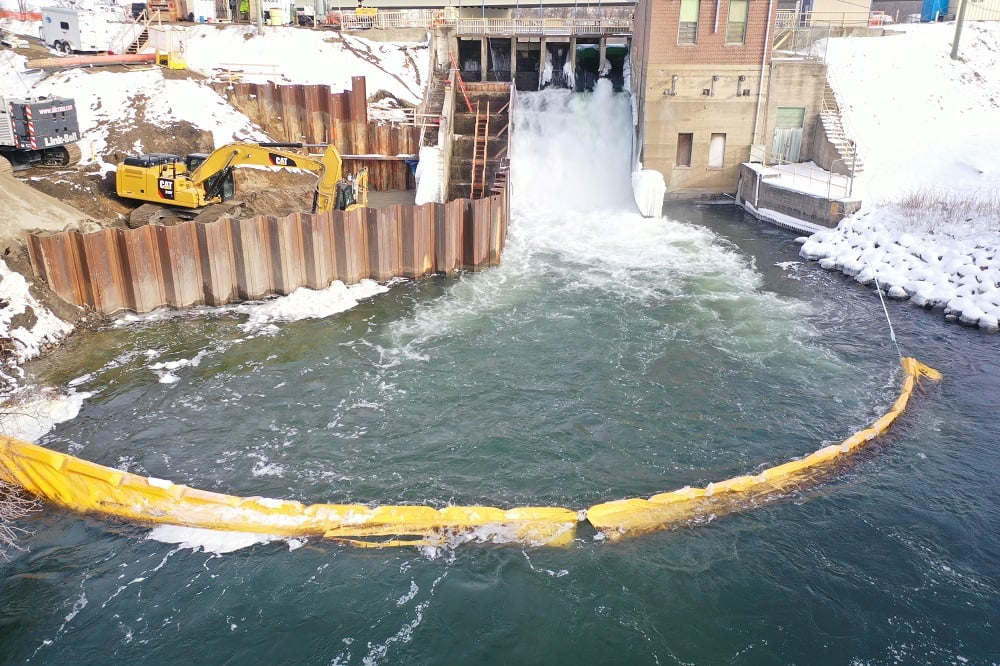 To contain and further prepare the site for repairs, Brennan’s dive crew installed a wooden cofferdam down the spillway steps, followed by a temporary sheeting cofferdam in the river. Two spillway gates remained inoperable during the project due to the cofferdam; however, the other 4 gates and hydro unit were still in use.

Excavation and Accessing the Old Spillway

To access the bottom portion of the existing spillway wall, the crew excavated approximately 400 CY of soil. This left a large exposed hole downstream of the new permanent sheeting wall. We ensured it was sloped to safe excavating standards per the Occupational Health and Safety Administration (OSHA). 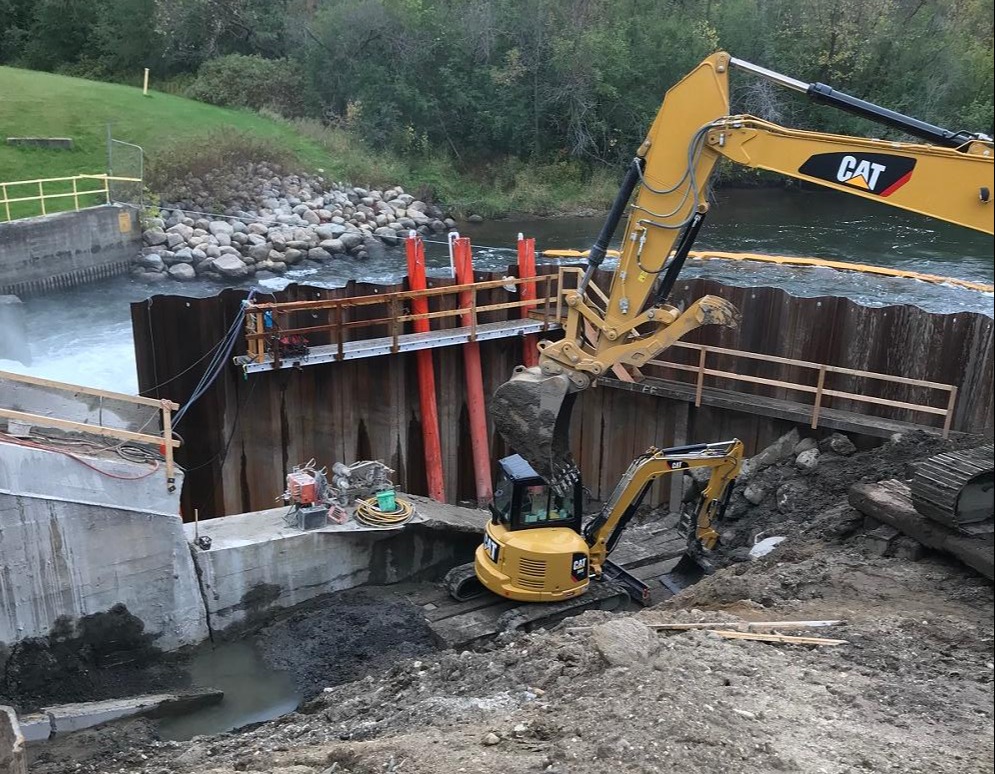 After excavating downstream, saw cutters removed 18 IN of concrete from the existing face of the wall. Then, to pour a new face, we used self-consolidating concrete (SCC). We chose SCC for this project due to the tall, thin wall height and the large quantity of rebar encapsulated in the pour. SCC removes the need to vibrate the concrete and is often a great choice for these types of pours.

Installation of the New Spillway Wall

We continued the following year with the re-installation of a wooden cofferdam along the spillway steps. We used an EFCO® panel cofferdam instead of temporary sheeting. 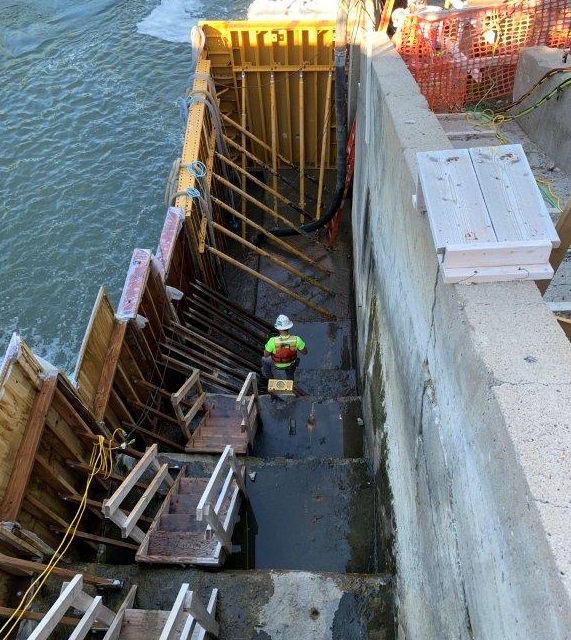 After the crew poured back the next portion of wall downstream of the permanent sheeting wall, we performed backfill/compaction on the slope of the embankment. Then, we demolished and replaced the remaining upstream portion of the spillway wall, along with an upper walkway slab on the top of the dam. Due to the tall pour heights (the tallest of which was 23 FT high) and large form pressures in this section of wall, we decided to use MEVA® forms instead of the Symons® panel forms. 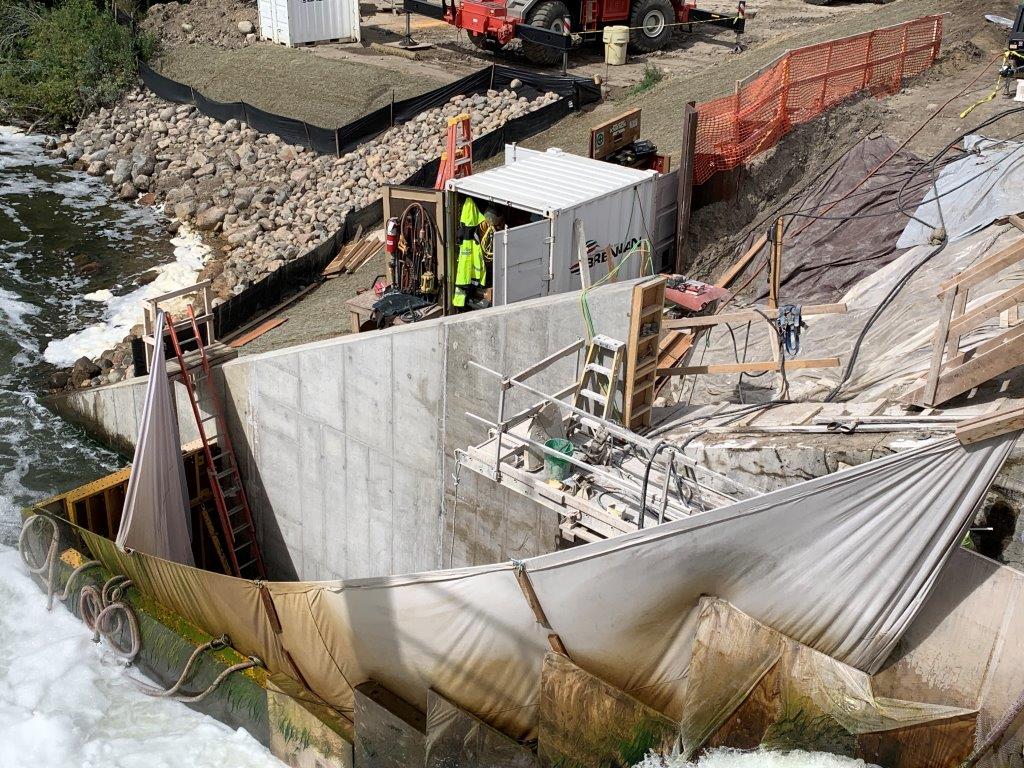 Challenges During the Project

We encountered several challenges during this project throughout 2019 and 2020. As might be expected when working on a 100-year-old dam, multiple unforeseen issues arose. In addition, many of the design revisions required approval by the Federal Energy Regulatory Commission (FERC), which often involved wait times that put the job on hold.

During the first year, we discovered voids in the existing apron of the dam that prevented us from dewatering the cofferdam. To stop the water infiltration and create a good seal on our cofferdam, our divers drilled and grouted multiple holes in specified locations.

Another challenge the crew experienced was the extreme cold and ice of northern Minnesota winters. The rushing water coming down the spillway of the dam quickly created a thick layer of ice on our cofferdam and shelters. 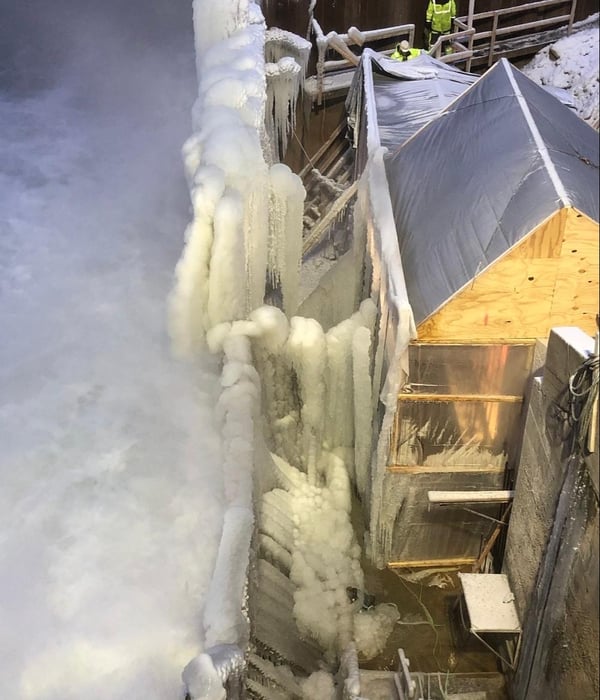 Ice buildup on our temporary shelters and cofferdam.

The crew spent a substantial amount of time melting ice from these areas, especially after coming back at the end of a weekend. Furthermore, cold temperatures made it very difficult to start up diesel equipment, as is the usual on winter projects. When the temperatures got extremely cold, the crew even had to leave equipment running overnight.

Brennan would like to thank our entire Pisgah Dam crew:

Dam repairs and maintenance are critical to power generation, here are our key areas of focus.

Learn more about our underwater repair and dam inspection recommendations, in our blog How to Ace a FERC Hydropower Dam Inspection.