Here's a Quick Way to Look at Your Bridge Pier... Underwater

Posted by Samantha Schmitz on May 04, 2012
{count-facebook}{count-twitter}{count-linkedin}

It is inevitable.  Over time a river will dig out the land over which it flows.  That’s why we have valleys, coulees, and scour problems on every structure we place in its path.  As James Eads would mostly likely attest, rivers cannot be fully tamed and scour repair will always be a constant struggle for anything set in their way.  Bridge piers are one of the most vulnerable structures to scour problems. 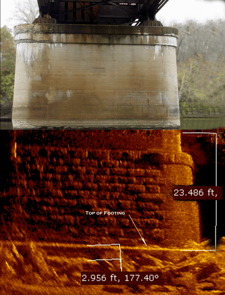 This leads to the periodic ritual of performing underwater inspections to ensure the bridge’s structural integrity remains intact.  Traditionally completed by trained divers, the process can be frustrating because underwater visibility is often very limited.  Scour damage and voids can be missed easily, or even worse, miscommunicated by the diver.  Also, areas covered in rip rap can hide critical problems developing underneath.  There is a solution that can create a detailed image of the underwater portions of the bridge pier and any scour problems around it.

A sector scan can capture an acoustic image of the pier that will most often show any areas of concern.  This image will help pinpoint areas that require diver concentration.  It can be included in inspection reports to show potential problems and potentially can eliminate the need for a full diver inspection altogether.

Sector scans can be carried out easily with a two-person crew and small work boat.  The images can be captured quickly and digitally combined with above-water photos to create a composite image of the entire structure.  The next time you are thinking about a bridge pier inspection, consider a sector scan.

Can you guess what's wrong with this bridge???