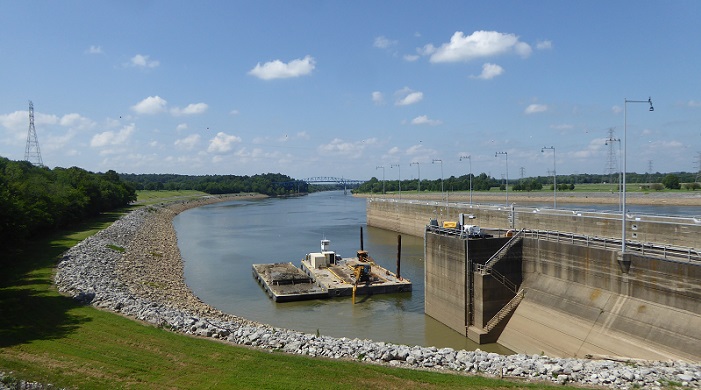 Asian Carp and the Barkley Lock and Dam

The full project name is a mouthful: the Barkley Lock and Dam Bio-Acoustic Fish Fence System project, or Barkley BAFF for short. Brennan was contacted as a qualified contractor to assist in both design and construction due to our marine expertise. Since most of the BAFF installation would take place underwater with dive assistance, this would be a great project for us. 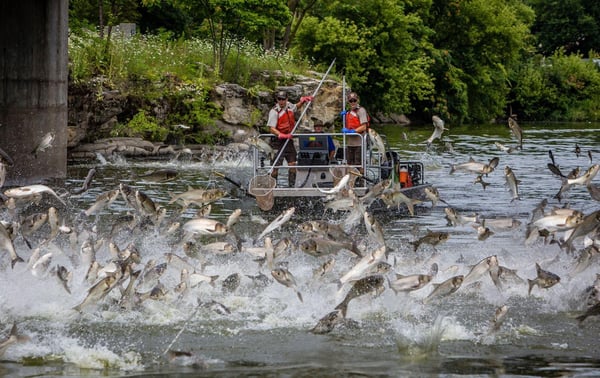 The Barkley BAFF project aims to prohibit upstream movement of Asian carp. Asian carp are a non-native fish species to southeastern American waterways, introduced decades ago to control weeds and aquatic parasites. But Asian carp began to out-eat, outgrow, and essentially decimate water habitats and ecosystems. Over the years, Asian carp migrated up American river ways and are now spreading throughout the Tennessee River Valley.

The hope is that the BAFF system will begin diverting Asian carp, keeping them downstream of the Barkley Lock. If it works well, additional systems will be installed to contain these fish. Design work began in the fall of 2018.

The United States Fish and Wildlife Service is the end client of this project as it’s federally funded; the work also involves many other stakeholders to ensure proper management. The United States Army Corps of Engineers-Nashville District (USACE), University of Minnesota, Travis Construction, and Collier Electric were also included—in addition to Fish Guidance Systems, Barr, and Brennan.

Brennan spent the first several months consulting with the USACE and other stakeholders, reviewing plans and estimating construction costs. We officially began work onsite in May 2019. 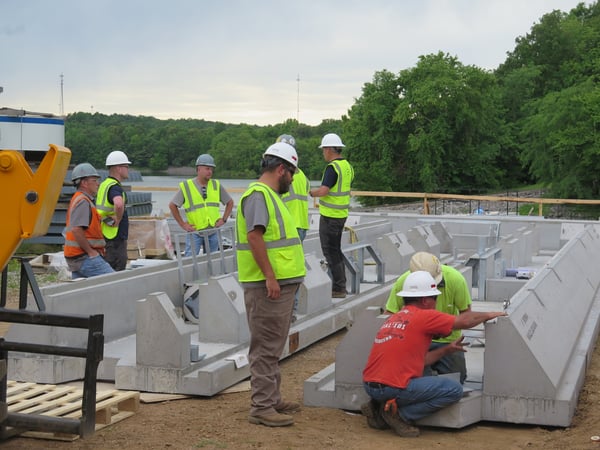 Asian carp are highly sensitive to sounds, lights, and disturbances within the water. The fish disco will safely create a barrier that corrals the fish south of the Barkley Lock and Dam. The system hasn’t been tried to prohibit the movement of Asian carp before; it’s generally used to guide migration patterns in other fish species. This is a test study for all involved.

With limited time onsite and the extremely high costs associated with the work, we designed this project to “go big or go home.”

We rented the largest milling head Antraquip® makes, an AQ‑6, and attached it to a CAT® 374D 170,000‑LB class excavator. High water has been a major factor in delays. Over the summer, the water was approximately 20 FT higher than where we could effectively mill the bedrock.

We attempted to create the trench with divers, but there was simply too much bedrock to effectively complete the work in the available time frame. The AQ‑6 mill head had to do the job!

This entire project is unique—from planning to execution and follow up. After finishing construction, Brennan will continue to conduct visual inspections using a remote operated vehicle (ROV).

We will perform inspections multiple times during the first few weeks following installation to observe the structures. Over the next three years, Brennan will continue intermittent inspections and provide ongoing maintenance support for the BAFF system. 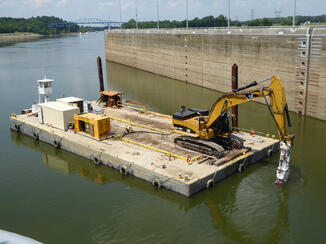 Our services moving forward will include maintenance of the underwater and mechanical systems, silt monitoring, and potential dredging over the next few years of the planned study.

For more information on Asian carp in this area, visit the Kentucky Department of Fish and Wildlife Services website or http://www.asiancarp.us/.