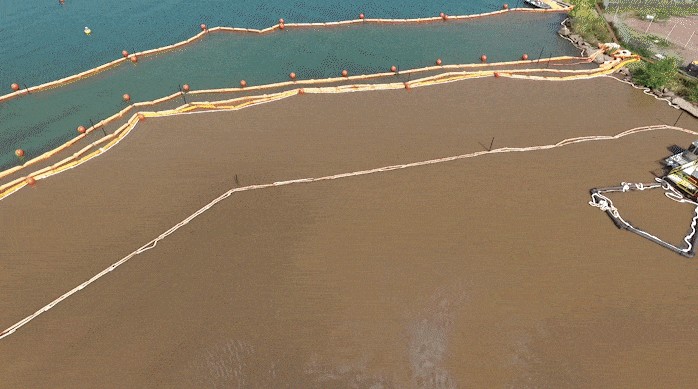 Turbidity is a hot-button issue in the environmental dredging industry because if it is not controlled, contamination can spread to clean areas. Since every dredge project will experience the presence of suspended sediments in the water column, proper measures are taken to control this problem.

In the dredging industry, turbidity plays an important role in determining the quality of water. High turbidity typically means that the water is cloudy due to sediment suspension. Whether it is hydraulic dredging or mechanical dredging, all dredging projects are subject to some level of particle suspension. Of all the systems that can be used to contain particle suspension, turbidity curtains are one of the most economical solutions.

What is a Turbidity Curtain? 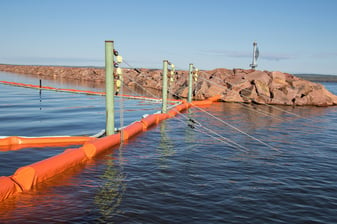 A turbidity curtain is a floating barrier that contains suspended solids that are present in the water column. It is typically deployed in positions around the designated dredge area where they will be most effective at containment. The top of the curtain is made from a float, off of which a skirt hangs down. The skirt length can vary, most likely depending on the depth. It is very important to secure them in place by anchoring them to the bottom or attaching the ends to an existing structure.

Compared to other forms of turbidity control, such as a sheet pile wall, a turbidity curtain has benefit of being more cost-effective. The cost of the materials and installation of the curtain is much less than that of a similar length sheet pile wall. In our experience it could be 20 times less expensive!

Though economical, turbidity curtains are not always a perfect solution.  Turbidity curtains are very susceptible to changing water conditions, such as wave action, wind seiches, and turbulent current. They require continuous inspections and an extensive maintenance effort, as it is not uncommon to have to re-anchor or replace sections.

Also, there are seams in the curtain that can allow suspended sediments to escape. Typically a turbidity curtain will not contain 100% of suspended solids. This can be amplified by changing water conditions. 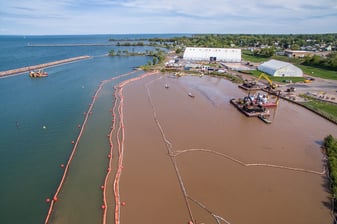 In cases where the escape of suspended sediments must be eliminated, several layers of curtain can be deployed. A multi-layered turbidity curtain is a series of consecutive curtains spaced apart. There are two advantages to this, one of which is additional layers of skirting that will disallow suspended sediments from escaping. The second advantage is that if the curtains are spaced correctly they effectively create an area in-between for the sediments to settle.

Turbidity curtains are an effective solution to containing suspended sediments. They may not be as effective as some of the more costly alternatives. However, if deployed correctly and managed well they can be a viable solution to even the most challenging dredge projects.